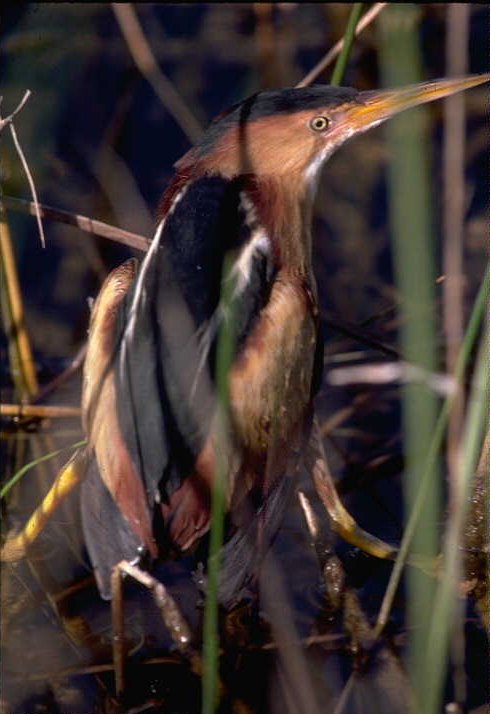 Common Name: Least Bittern
Species Name: Ixobrychus exilis
Description: This bird is the smallest of the North American herons and is distinguished by large chestnut patches on it’s wings. Males are darker than females. When alarmed, the Least Bittern freezes in place with its bill pointing up, turns its front and both eyes toward the source of alarm, and sometimes sways to resemble wind-blown marsh vegetation.  They are thought to prey mainly on small vertebrates, including fish, snakes, frogs, salamanders, and occasionally, small mammals and bird eggs.
Where it can be found: Densely vegetated wetlands in southern Manitoba with lots of emergent cover like cattails.  You will hear the Least Bittern’s soft coo long before you are able to locate it.
Threats: The main threat to Least Bitterns is draining of wetlands for conversion to farmland and urban development. Bitterns generally require large, quiet marshes and as marshes decrease in size and human recreation increases, the population declines in an area.
Information Sources: Royal Ontario Museum, Photo By R. Bennetts (United States Geological Survey), SARA Registry