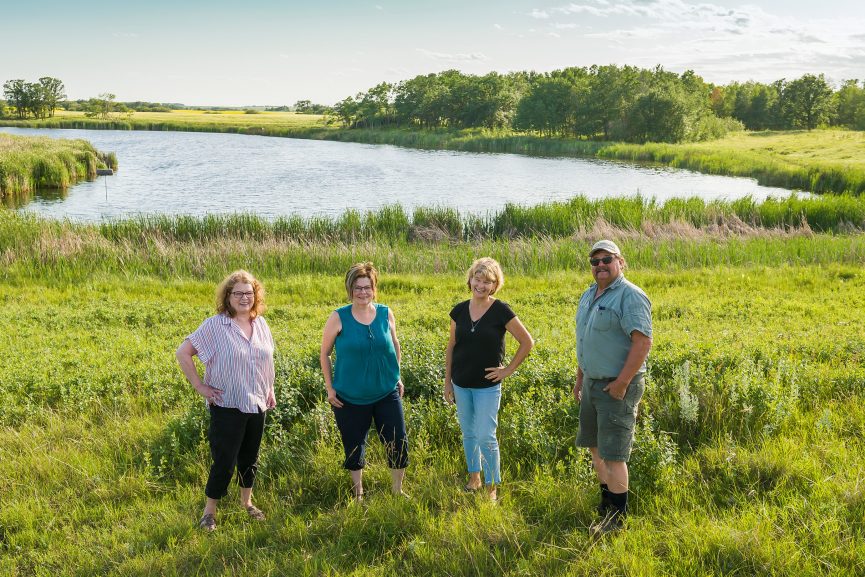 At the start of a new year, it is nice to look back on accomplishments of the previous year and see success. In the conservation world, Manitoba Habitat Heritage Corporation is looking back at the past 20 years to see the success of its Conservation Agreements program in the Whitemud Watershed and throughout Manitoba. It was 20 years ago when the Corporation signed its first Conservation Agreement with a Manitoba landowner.

“It was a significant time for us when the province officially passed The Conservation Agreements Act in 1998. Before that, we weren’t able to do much to protect or enhance the natural ecosystems or wildlife habitat on lands that were in private landownership. The act allowed us to create legally binding agreements with landowners that are positive in so many ways,” said Wes Pankratz, Habitat Conservation Specialist for Manitoba Habitat Heritage Corporation (MHHC).

A conservation agreement is an agreement between a landowner and MHHC that maintains the habitat, water quality and biological diversity of the land without affecting other uses of it. The parts of the land that are ecologically sensitive, such as wetlands or the areas around rivers are protected while the landowner can continue to utilize the remainder of the property in its current use. It is a key tool used by MHHC for long-term habitat conservation.

In the Rural Municipality of Oakview near Rapid City, Wayne Fossum, was one of the first landowners in the province to sign a conservation agreement with MHHC. In the fall of 1999, just over 100 acres of his property was protected under the new legislation. The land was conserved under the Potholes Plus Program funded by the North America Wetlands Conservation Act – funding to conserve high-quality duck habitat. “At the time, I thought it was important to preserve some of the land. It was special to me and I thought special for all of Manitoba. Where would we be today if the government didn’t put this program in place?” said Wayne.

Rick Nylen of the Minnedosa area, as well as Glen Cummings from Neepawa, were also early adopters of the program. They signed agreements on some of their land around the same time as Mr. Fossum. Starting with these conservation pioneers in Manitoba, area residents and municipalities are still leaders in conservation. In addition to private landowners continuing to conserve their lands, in 2010 and 2014, local municipalities worked with Wes Pankratz and MHHC to permanently conserve 53,210 acres in and around community pastures.

The properties that have conservation agreements on them can continue to be used for agricultural purposes. Landowners use the land for haying, grazing, sustainable wood harvest, as well as recreation. By keeping the vulnerable portions such as the wetlands and woodlands in their natural state, the land is protected and the environment benefits from ecological preservation.

Although Mr. Fossum no longer owns the land, he remembers it being a haven for wildlife as the property is known as a high waterfowl nesting habitat. “It’s a big body of water, I used to canoe on it at one time. There were large beaver huts and all kinds of waterfowl. People have said they’ve seen eagles, cranes and other birds out there,” said Wayne.

Even though the act was passed over twenty years ago, the agreements haven’t changed a lot. They only evolved slightly to allow landowners to manage the land more effectively. However, the same principles of not breaking or draining the land when a conservation agreement is in place still apply.

“What hasn’t changed in the last 20 years, is the land,” said Pankratz. “That’s because these agreements helped us to keep it the same, helped us to protect the valuable habitat that was already there.”