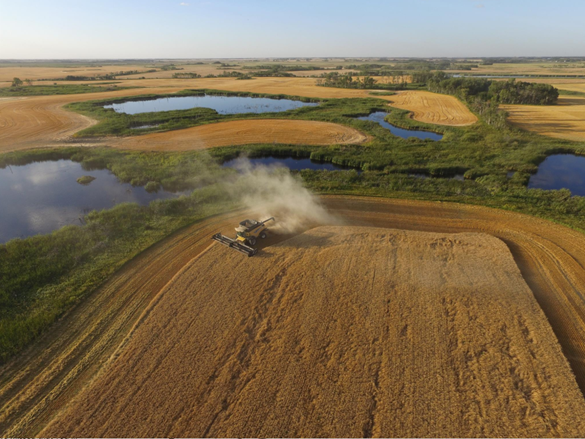 Next year will mark 35 years for the Manitoba Habitat Heritage Corporation (MHHC). Established in 1986 by the Provincial Government of Manitoba; MHHC was created to build partnerships and work with landowners, farmers, and ranchers in rural Manitoba. The mandate is simple: “Conserve, restore and enhance fish and wildlife habitat in Manitoba” and with the slogan, “Made in Manitoba”, MHHC has done just that.

“Agriculture is the backbone of the economy. MHHC continues to focus on partnerships with landowners to find a balance within the agriculture and conservation relationship”, says Kasie McLaughlin, Habitat Conservation Specialist for MHHC.

According to the 2016 Manitoba Census Report, there are approximately 17.6 million acres of farmland in Manitoba. Within that landscape MHHC has approximately 300,000 acres of conservation projects.

The history of MHHC includes the Habitat Enhancement Land Use Program (HELP) which started in Shoal Lake area in the late 80’s. HELP was a pilot project designed to test new ways to conserve waterfowl habitat cooperatively with farmers and ranchers. Examples of the projects included predator fencing, duck nesting structures and short-term leases for grasslands and wetlands.

“HELP tested a variety of conservation activities to see if they could be beneficial and meaningful to landowners and wildlife” said McLaughlin, “Waterfowl need sloughs, grasslands and other natural areas. The key to conserving those areas is the landowners and the partnerships that we can create and maintain”.

Decades later, MHHC continues to use Conservation Agreements to build partnerships with landowners to conserve sloughs and grasslands for wildlife habitat. MHHC recently worked with Don and Wenda Best of Kenton MB, to conserve 375 acres of wetlands and grasslands on their farm. The Best Family will continue to graze the pastures and farm their improved land while maintaining a space for wildlife.

“Its just the right thing to do, keeping the sloughs and bush around. You see all these farms with no habitat on them, it creates problems downstream. I like seeing the birds and wildlife on my land, the water helps the cattle immensely,” said Don Best, Mixed Farmer from Kenton, MB.