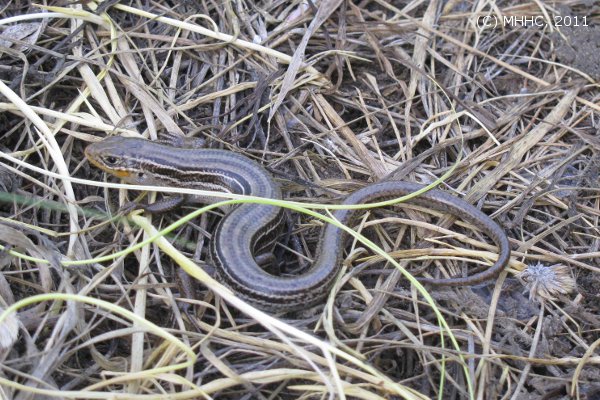 Common Name: Northern Prairie Skink
Species Name: Eumeces septentrionalis
Description: These little creatures are Manitoba’s only natural lizard species. Northern Prairie Skinks are brown with 4 pale longitudinal stripes. Juveniles are distinguished from adults by a bright blue tail. Adult males are distinguished from females by a reddish orange tinge on the head and throat during the breeding season. Prairie Skinks feed on insects and other small invertebrates, and their movements are limited; the maximum radius of a skink’s home range rarely exceeds 100 m, and they spend more than 7 months of the year in hibernation underground.
Where it can be found: The Northern Prairie Skink is only found in one part of Canada – southwestern Manitoba. And in Manitoba, the species is restricted to sandy soils with mixed grass prairie vegetation.  These conditions occur in the Stockton Loamy and Miniota Sands of the Carberry Hills along the Assiniboine Delta, and at the Souris Sands of the Lauder Sandhills. The limited supply of habitat, combined with local pressure to cultivate mixed-grass prairie stands, threatens the continuation of the Skink.
Threats: The Skink’s mixed-grass prairie habitat is being fragmented and lost to cultivation, Aspen succession and invasion by exotic leafy spurge.  Although much
of the Prairie Skink’s habitat is publicly owned, this has not prevented succession or
invasion by Leafy Spurge because most public lands are under fire suppression. The
remaining mixed grass prairie habitat on the appropriate soil types is becoming
increasingly fragmented as this habitat is being altered. In winters with little snow cover,
frost may penetrate down to their hibernation den, decreasing survival rates.
Information Sources: COSEWIC Report