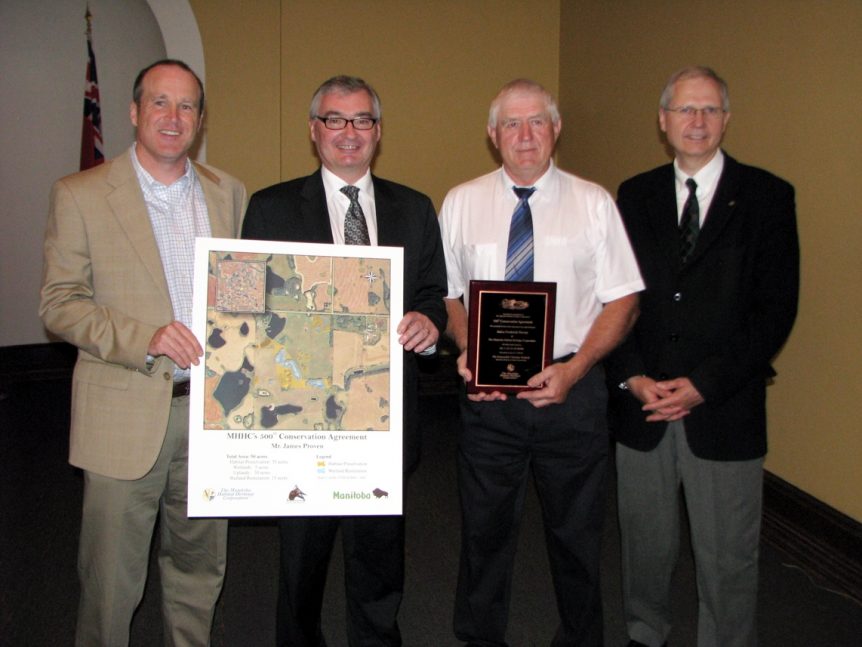 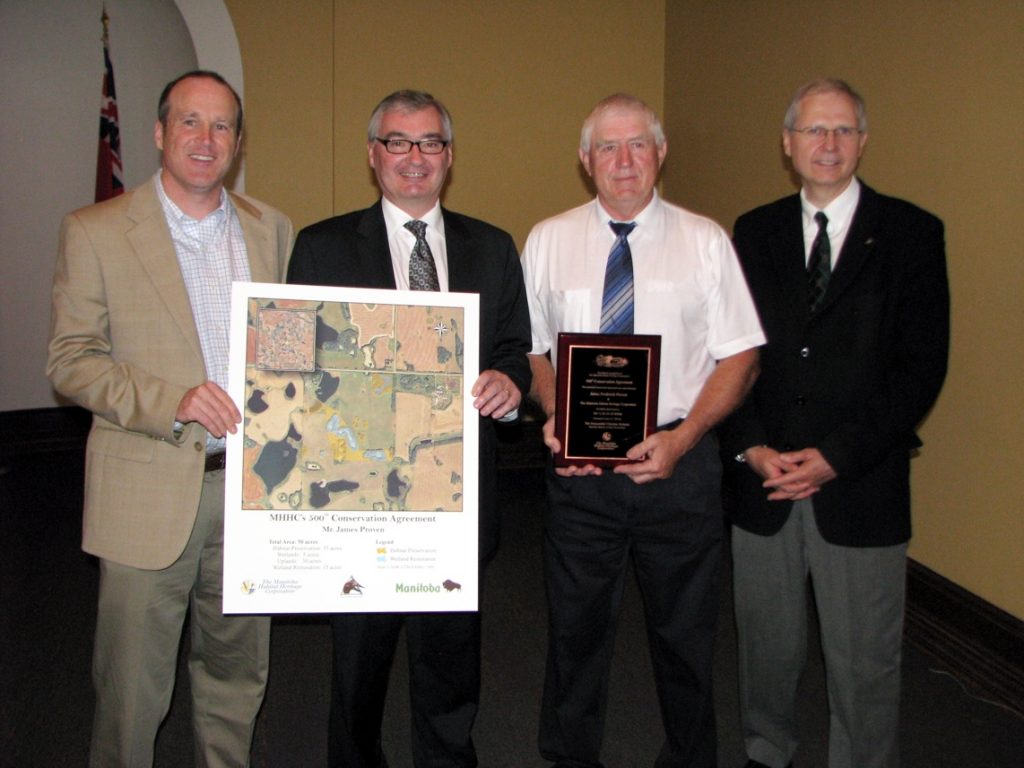 The CA count started in 1999 when then Minister of Natural Resources, J. Glen Cummings, signed a donated conservation agreement, securing thirty acres of wetlands in the R.M. of Langford. Since then, MHHC, a Manitoba-based Crown Corporation, has become one of the largest holders of conservation agreements (easements) in Canada. The completion of 500 CAs in Manitoba means that an area about 4.75 times the size of the City of Brandon, or the equivalent of 43,530 Canadian football fields, has been protected forever.

On March 11th, 2010, MHHC finalized its 500th conservation agreement (CA) with Mr. James Proven in the R.M. of Saskatchewan. Provincial Agriculture Minister Stan Struthers, standing in for the Water Stewardship Minister, Christine Melnick, marked this significant achievement on June 15th with a presentation at the Manitoba Legislature. “Today we recognize this important achievement by the Corporation as well as the critical role landowners play in conserving and restoring natural lands on private property.”

Sadly, Mr. James Proven passed away on May 14th, 2010, before he could be recognized in this important milestone. Keith Proven, James Proven’s son, accepted the recognition on his father’s behalf.

“Dad was a conservationist,” said Keith Proven “That’s what drove him to always think that the bush would stay the same and that the water would remain. This agreement creates a conservation legacy and fits with my father’s view of the land. He believed that agricultural production and habitat conservation could occur side by side.”

Over the past decade, MHHC has worked with many producers like the Provens to ensure key habitats in Manitoba are protected while not restricting existing production. “Conservation agreements like this strike a balance between land use and habitat protection on private land,” said John Whitaker, Chair of the MHHC. “They can provide long-term protection of wetlands, woodlands, grasslands and riparian areas without affecting productive farmland.”

Through the signing of over 500 voluntary CAs, MHHC and its partners have invested more than $6.8 million into the rural economy through landowner payments. These funds allow producers to continue being good stewards of the land and, in turn, provide benefits to all Manitoban’s. It is estimated that the benefits these CAs provide to society, including, hunting, fishing, carbon storage, clean water and air, have an estimated annual monetary value of $14.8 million. Looking at this return on investment, for the Corporation and all Manitoban’s, investing in habitat is just good business.