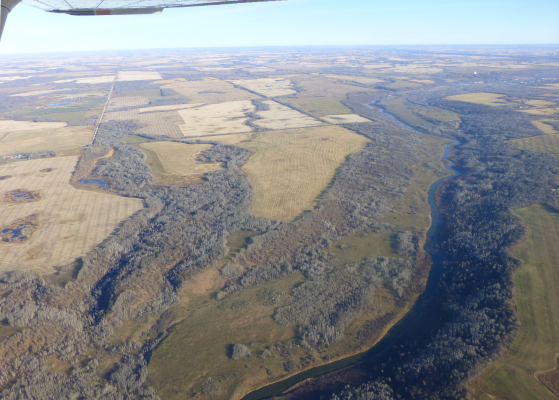 The Manitoba Habitat Heritage Corporation (MHHC) was pleased to have formally recognized the Crew family for their donation of two parcels of land to MHHC at a recent dedication ceremony.

Frank Crew, originally from Birtle, Manitoba, donated the property that had been part of his family’s farm for half a century. After grain farming in the Birtle area for more than 50 years, Crew retired in 2000. It wasn’t long after that he decided to donate close to 400 acres of land to the Manitoba Habitat Heritage Corporation.
“It was for the love of nature. We’ve requested no hunting on our land for years. I like wildlife and wanted to provide them with a safe home and protect them as much as possible,” said Crew.

The land is situated along the Birdtail River Valley, west of Birtle. Similar to all lands donated to MHHC, it is available to the general public for walking, hiking, bird watching and for the enjoyment of the great outdoors. As per Mr. Crew’s desire to maintain this land as a refuge for wildlife, the property will be closed to hunting.
The land is rich in wildlife and is home to a variety of species including bear, elk and deer; smaller animals such as coyotes, rabbits, skunks, raccoons, squirrels and a large variety of birds.

Roy Bullion, Habitat Conservation Specialist with MHHC, said they will continue to manage the land for the next three to four years the same way that it is currently managed. This means the portions that are cultivated will continue to be cropped.

“I think it’s spectacular for anyone to be able to do this. It’s a great personal commitment to what he (Frank Crew) believes in and it is so important for our biodiversity and the work that we do,” said Bullion.

The highlight of the Dedication Ceremony held on October 3 was the unveiling of a permanent cairn that recognizes the donation from three generations of the Crew family. Guests in attendance at the event included: Frank Crew; John Whitaker, MHHC Board Chair; Roger Wilson, Prairie View Municipality Councillor; members of the Birtle community; and friends and neighbours of the Crew family.